How to Plan a Trip Out West (Itinerary Included) 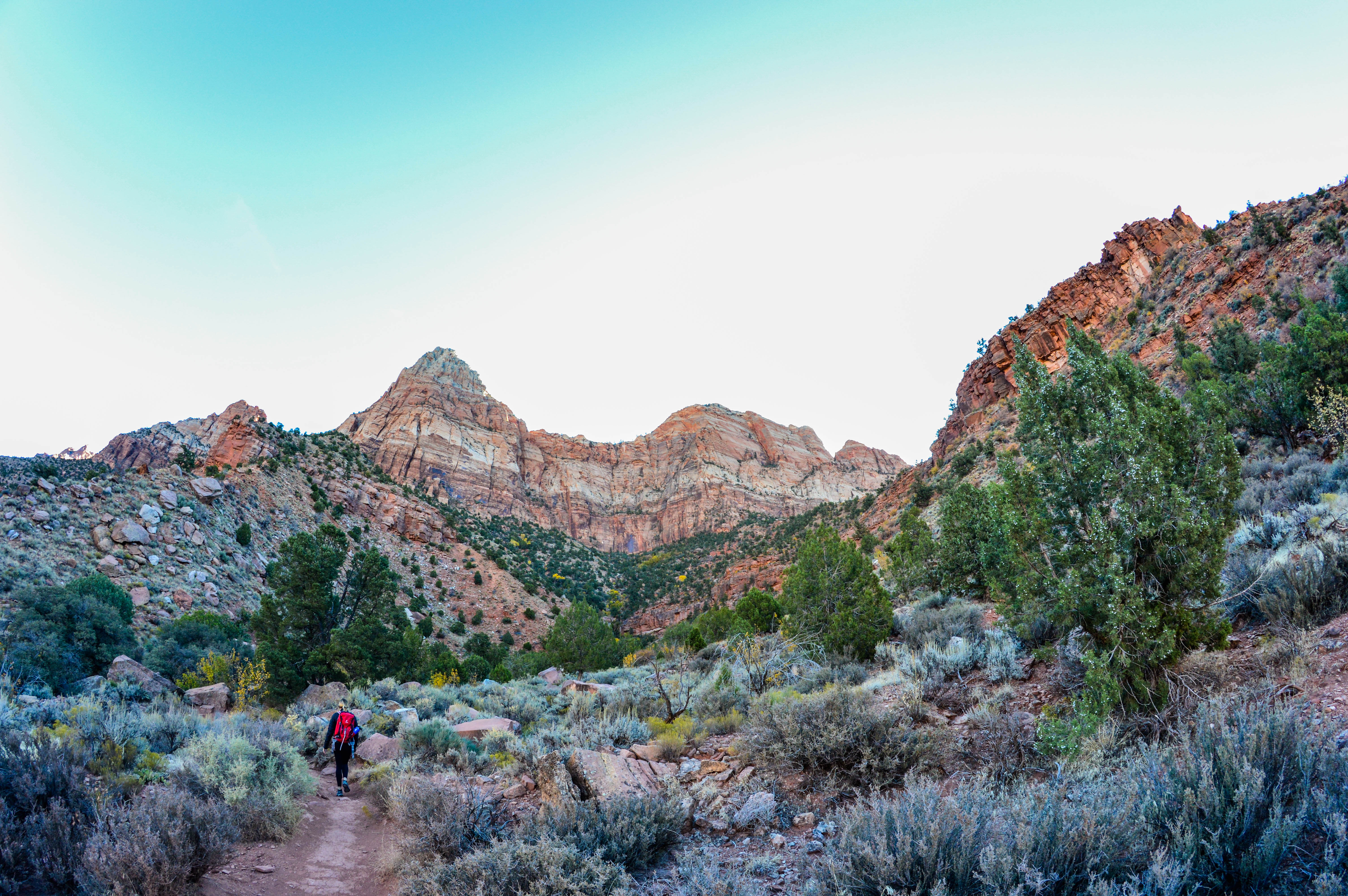 If you’ve ever wanted to plan a trip out West, but feel overwhelmed by the amount of places to go and see, I’m here to (hopefully) ease your anxiety!

When my husband and I started planning our trip out West we were completely frazzled by the amount of information available to us online. While it was all helpful, it almost made it more challenging. It felt like we had to jump back and forth between multiple websites to get all of the details we needed.

I’m here to share our full itinerary from the trip, including hotels, places to eat, hikes and more. I’m hoping you can use this posts as a starting point to plan your trip.

*Please keep in mind we planned far in advance and were able to watch prices to ensure we found the cheapest deals. We booked (almost) everything in May for an October trip!

Transportation: Flights from Cleveland -> Las Vegas, Las Vegas -> Cleveland nonstop via Spirit Airlines. It cost $170 per person, roundtrip. We rented a car via Dollar Car Rental, which is a part of the McCarren Rental Car Center. It cost roughly $25/day to rent the car.

We flew into the Last Vegas airport, rented the car and drove straight to our hotel in Zion. The drive took about 2 hours and 40 minutes. The drive is easy and scenic (if you’re driving during the day). We arrived to the hotel after midnight.

We stayed at the Bumbleberry Inn, which was $90/night. It was one of the cheapest places we could find in the area. We stayed here for three nights. It’s located in Springdale’s downtown area, where you will find almost all of the hotels and places to eat.

The good and bad. The room was cheap, so as you can imagine it was subpar. We didn’t mind, though, since we only needed it for sleeping and showering. As long as we had a bed, decent WiFi and running water, we didn’t care. The major good: the hotel has it’s own restaurant called Wildcat Willies, where you get a free breakfast every morning as part of your stay. The food was incredible. It is not what you picture when you think of hotel food. This was great for us since we needed a hearty meal to start each day before hiking. The hotel is in walking distance of a market, a lot of other restaurants and a shuttle stop, which you’ll need to take to get in to the park.

Where to eat. As mentioned above, we ate at Wildcat Willies every morning for breakfast since it was free for us. We also enjoyed a dinner there the first night. It’s relatively cheap and again, delicious! Our second dinner we went across the street to Oscar’s Cafe, a Mexican restaurant. It was cheap but we had giant servings, so we were pretty happy. Just try and get there early – it seems to be one of the more popular places to eat!

After we wrapped up our hiking in Zion for the day, we hopped in the car and made the drive to Bryce Canyon, which is about 1 hour and 50 minutes, and we gained an hour driving into Arizona. We arrived a little after 7pm.

Keep in mind while you’re planning that Utah and Arizona are in different time zones. So throughout the trip you may gain or lose an hour, depending on where you’re headed.

We stayed at the Best Western Plus Ruby’s Inn, which was $95/night. There are only two or three hotel options in Bryce Canyon, so I’m guessing you’d end up staying here. Our room was fairly nice and close to the restaurant. We stayed here for two nights.

The good and bad. The room was nicer than the one in Zion, but this time we did not have complimentary breakfast. The hotel is broken up into several buildings, so if you get the second floor you won’t have to deal with noisy upstairs neighbors. The hotel had a pool and hot tub, which we took advantage of. There’s also a decent market, where we purchased all of our snacks for hiking.

Where to eat. There is literally two restaurants in the entire area, so getting dinner the first night was a bit challenging and frustrating. The restaurant connected to the hotel, Cowboy’s Buffet & Steak Room, is big and has a buffet option, but since there are limited places to go it was packed. Try and grab food at an odd time to avoid the crowds.

We woke up early in Bryce to catch the sunrise and complete our last hike, then left to make our way to Page, AZ where we planned to visit the famous Horseshoe Bend and Antelope Canyon. The drive was about 2 hours and 30 minutes. We arrived a little after 4pm.

We stayed at the Best Western View of Lake Powell hotel, which was $100/night. This was the nicest hotel room we stayed in. It had a nice little pool and a decent complimentary continental breakfast buffet. We stayed here for one night.

The good and the bad. As I mentioned, this hotel was very nice. It had an excellent view of Lake Powell and a clean, welcoming lobby. The room was easily the nicest one we stayed in on the entire trip. We had no complaints!

Where to eat. Since we only stayed one night, I can only offer one suggestion to you: El Tapatio (can you tell we love Mexican?!). Our server was friendly and fun, the margaritas were so good, and the food was great.

After a long day spent in Page, we hit the road for the Grand Canyon. The drive was about 2 hours and 30 minutes. We arrived around 6:30pm.

We stayed at one of the well-known hotels within the park, Yavapai Lodge, which was $120/night. The room was similar to the one in Bryce Canyon, and it was broken up into buildings the same way. We stayed here for two nights.

The good and the bad. The cell service in the Grand Canyon is not great, so we were pretty disappointed when we discovered we had no WiFi in our room. The only place you could access it was in the main lobby where the restaurant is, which was about 5 minutes from where we were staying. We were right by a shuttle stop, which was really nice when we were ready to begin hiking.

Where to eat. Restaurants are pretty limited once you’re inside the park and at this point in the trip we were getting lazy, so we ate in the main lodge both nights. It’s set up like a Sheetz, where you go up to a screen and order your food and drinks, then wait for your number to be called. They also had a pasta buffet option if you didn’t feel like waiting. The food was so so.

I hope you found this information useful as you begin to think about or plan your trip. There are plenty of other great places to visit in the area like the Arches, but this was the route we wanted to take in order to see the most with the time we had. We definitely want to take another trip out there! It’s hard to see everything if you don’t have a lot of paid time off (which we don’t).

Wildcat Willy’s is amazing! We are there every day we were there. We stayed at a B&B though.

You travel like we do, making sure we catch the deals and trying to find cheap hotels. This is a great guide!

Nice guide! Thanks for taking the time to put it together.

som eof those photos are incredible

This is very helpful, thank you. Do you remember some of the names of hikes you did at each place? We are planning a trip and will have three little kids so trying to find some manageable hikes for them. We will have a 5yo, 3yo, and 8mo

Zion – Emerald Pool, Weeping Rock, Pa’rus would all be great options with kids!
Bryce – I would say the rim trail would be your best bet.. it’s the flattest area. Navajo Loop would be fun too but there is some elevation!
Grand Canyon – honestly I think you could really only do the rim trail area. Any other trails take you down the canyon which can become very steep and challenging.

I hope you have a great time!

With winter almost behind us, it’s time to start planning visits to see the spring flowers bloom, and I’m sharing the best spots in Cleveland and Northeast Ohio region. Check out where to see cherry Read more…

Tips for Hiking in the Winter

*I may earn commission for purchases made through some of the links in this post. Hiking in the winter can be challenging for many, especially if you’re new to hiking. Between the cold temperatures and Read more…