Your Guide to a Weekend in Toronto 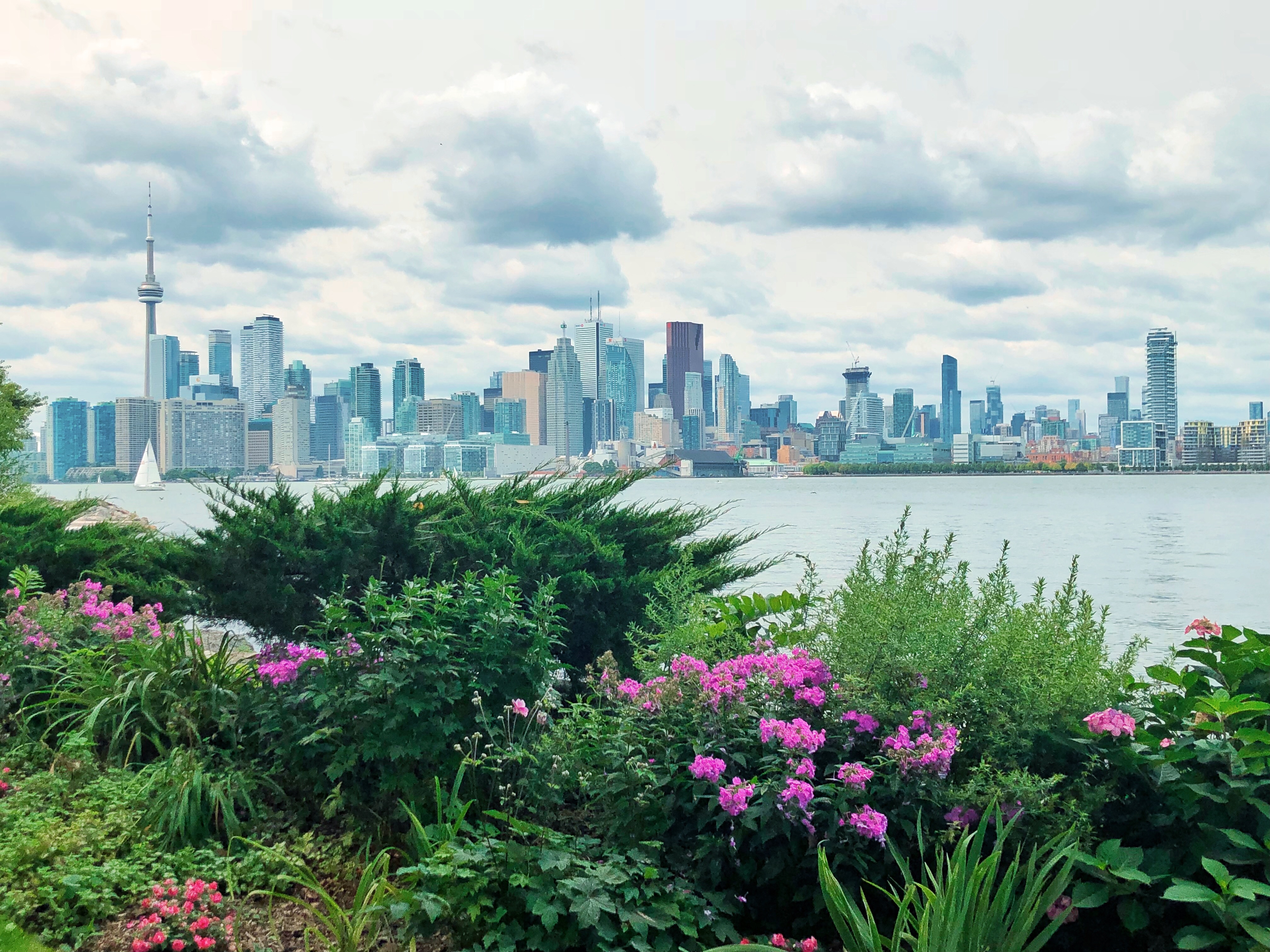 Road trips are a quintessential type of adventure, and I like to take them as frequently as possible. So, when a friend proposed a road trip to Toronto earlier this year I was excited. Then as soon as we started researching things we could do, I was sold.  A five hour drive from Cleveland and we were in another country! I was honestly blown away by how much Toronto and the stops along the way had to offer.

In just four short days we saw four waterfalls, hiked to an overlook seeing the city of Hamilton, ate some of the best ice cream I’ve ever had, biked the entire city of Toronto, hopped on a ferry to an island and so much more!

For two people who were on a tight budget, I am surprised by how much we did and saw. It was one of the most fulfilling trips I’ve had in a long time, and the only things we spent money on were gas, food & drink and a place to stay.*

If this sounds like the type of trip for you, I’ve included our itinerary and trip highlights below.

*Because we drove, we actually brought our bikes with us so once we were in the city we either walked or biked everywhere. We did not use any public transportation or taxi/Uber.

We hit the road early on Thursday, around 8am as we had a full day of stops ahead of us. Our first visit was to Niagara Falls. We parked on a residential side street (to avoid outrageous parking fees) and walked down to check out the falls. Although it was pretty crowded, we knew we’d kick ourselves if we didn’t see them. Since we both had done Maid of the Mist on past trips, we decided against it to save on money. But, if this is your first time going I’d recommend dishing out the $20 for a pretty cool experience.

We drove another 20 minutes out to Niagara Glen Nature Preserve after the falls. This area is one of the best preserved remaining examples of Southern Ontario’s original Carolinian forest, which is pretty unique in itself.

We hiked a combination of trails, starting at Cliffside, to Terrace, to River. Once we hit the end of River we took it all the way to the other side to the Whirpool trail back to the stairs at the top.  The water is insanely blue, and the whirlpool area is something you have to see with your own eyes.

From here, we drove another hour closer to Toronto and made a few stops in Hamilton to visit a park with two waterfalls and an overlook. We saw Webster Falls, Tew’s Falls, and the ended the day with Dundas Peak. If you’re headed to Toronto I’d recommend stopping here. It was a nice break in the drive and each hike was relatively short. I’d say we spent about an hour and half here total.

Finally, after a full day of adventuring we made our way into the city. We stayed off of Church St. in the Village at an Airbmb. This was a really great area to stay in terms of location. We felt safe and comfortable to walk, with a lot of great restaurants and coffee shops only a few minutes away. We walked down to Toronto’s “Times Square” and saw the Toronto sign lit up at night. By then we were exhausted and settled on Chipotle as our dinner choice (cheap and very filling).

We started our day at Second Cup, a local coffee shop (with several locations throughout the city) on Church St. The coffee was delicious and it was the perfect place for some early morning people watching.

As I mentioned before, we planned for things to do that were mostly free. It was raining on and off, so we visited the Toronto Public Library, as well as the Thomas Fisher Rare Book Library, which is on the University of Toronto campus. If you’re nerds like we are, these are two places you definitely need to visit while you’re in the city.

We spent the remainder of the day biking around the city checking out the different neighborhoods. Toronto is extremely bike friendly. There are bike lanes with small barriers on almost every main, busy street which made it a lot less stressful than I thought it would be.

We rounded the day out with pizza at North of Brooklyn Pizzeria (in the Village) and ice cream from Summer’s Homemade Ice Cream (in Yorkville). Both delicious and reasonably priced.

Knowing we were going to have better weather, we saved a lot of our sightseeing for this day. We started the day early at 7am, hopped on our bikes and made our first pit stop at Jet Fuel Coffee. This is an espresso only coffee shop, so don’t try asking for drip (I already did it for you!) because you won’t get it. We both agreed Second Cup was the better of the two.

From there, we went back to Nathan Phillips Square to see the Toronto sign in the daylight. After a quick pit stop, we headed the Graffiti Alley (another free activity) to check out all the cool art. There is one main alley, and several smaller ones along the way. We really enjoyed going through this spot! It makes for a lot of fun photo opportunities.

We had one more stop to make before heading to the island to explore. In our research we literally Googled “weird free things to do in Toronto” and this next activity piqued our interest.

The Vog Vault, as it’s called is inside the building’s former bank vault. This space was transformed into the world’s first ever, gravity defying photo opp inside of the Fluevog Shoe store. The inspiration behind it? An old photograph of the shoe designer himself, John Fluevog. We had way too much taking photographs in here.

Once we finished having our fun, we grabbed a quick brunch and made our way to buy our ferry tickets so we could visit the Toronto Islands with our bikes in tow. We started at Hanlan Point since it had the shortest ferry line. We biked the entire island within a few hours, stopping every now and then to take photographs and enjoy the city skyline views. There’s also a nude beach on this island if you’re feeling super adventurous!

We made our way back to the mainland so we could, of course, get more ice cream. We kept seeing this place, Bang Bang Ice Cream & Bakery, pop up as a “must visit” stop, so we couldn’t resist. The shop itself is very small inside, so expect to stand outside and wait to be called in. If you’re wondering whether it’s worth it.. IT IS. They had so many unique flavors like Earl Grey tea, and it was some of the best ice cream I’ve ever had.

Luckily this was our last stop for the day because my bike tire popped, so we had to walk them back to our place. We took that as a sign to call it a night. We grabbed a quick dinner at El Rancho on Church.

This was our final day in Toronto, and we planned the day with a goal of leaving by 2pm so we could be back in Cleveland at a reasonable hour. We started the morning checking out the Distillery District.

We grabbed coffee at Brick Street Bakery before walking around the area. It’s definitely more of a night time place. It was pretty peaceful when we were walking around. From there we decided to walk to the Gooderham Building as our last downtown destination.

Once we made it back to the car, we headed to our final destination of the trip: Tommy Thompson Park. We had no idea what to expect as neither of us had been here before. It’s considered “the wildest place near downtown Toronto” and is known as a great place for bird watching. Unfortunately, since my bike tire blew the day before, we had to walk the entire park which took us longer than we anticipated. If you don’t bring your own bike, they have rentals right at the entrance. I’d suggest grabbing one of those if you want to see the whole park! While it was a beautiful area, by this point we were so tired from walking we probably didn’t enjoy it as much as we normally would have.

Once we finished here, we hopped in the car and began the journey home. When you are making your plans, be sure to factor in time at the border to get back into the states on your way home. We were delayed about an hour and a half waiting to get through.

What’s your favorite place to road trip to?

The Vog Vault looks so awesome. Toronto is such a neat place this really makes me want to go back!

With winter almost behind us, it’s time to start planning visits to see the spring flowers bloom, and I’m sharing the best spots in Cleveland and Northeast Ohio region. Check out where to see cherry Read more…

Tips for Hiking in the Winter

*I may earn commission for purchases made through some of the links in this post. Hiking in the winter can be challenging for many, especially if you’re new to hiking. Between the cold temperatures and Read more…